Tyvek® is a brand of flashspun high-density polyethylene fibers, which is a synthetic material. The name is a registered trademark of the DuPont company, a company with a well-known reputation in the textile and chemical industries.

Tyvek® is often used as housewrap, a synthetic material used to protect buildings during construction. The material is difficult to tear but can easily be cut with scissors or a knife. Water vapor can pass through Tyvek®, but liquid water cannot. All of these properties make Tyvek® for packaging a smart choice.

Tyvek® is a nonwoven product consisting of spun bond olefin fiber. It was first discovered in 1955 by a researcher for the DuPont textile company, named Jim White. While working in an experimental lab, Jim noticed a type of white fluff coming out of a pipe in a DuPont experimental lab.  That fluff was a product known as polyethylene, which DuPont requested a patent for within a year of the discovery. After technologies improved during the next few years, in 1959 DuPont discovered that when the fluff was spun at high speeds it produced a durable fabric that was able to be cut with a blade. While the product Tyvek® has been used since 1959, DuPont did not trademark the actual brand until 1965, making it available for commercial purposes in April 1967. As of 1970, Tyvek® had reached the mainstream construction industry on both a national and global scale, and is often used for the construction of houses due to its unique ability to keep out liquid, while allowing vapor through. In 1972, DuPont released Tyvek® packaging for sterile instruments that were to be used by surgeons and doctors in the medical field. 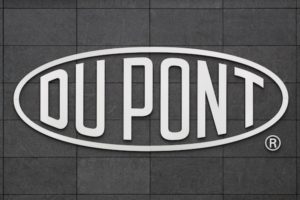 Unlike medical-grade papers and films, Tyvek® is compatible with all of the most commonly used sterilization methods, including: ethylene oxide (EO), gamma, electron-beam, steam under controlled conditions and low temperature oxidative sterilization.  The material science of Tyvek® enables sterilant gases and steam to penetrate and escape quickly.

Tyvek® has been a trusted choice for medical device and pharmaceutical manufacturers and specialized sterile packaging suppliers worldwide for decades. Because Tyvek® is produced according to ISO 14001, it can also be recycled, according to local regulations.

At Griffin Rutgers, we pride ourselves on providing the correct printing equipment for printing on Tyvek® thereby ensuring that the printing on the packaging meets federal guidelines with printers that deliver clear, concise imaging. To assist you in selecting the correct printer for your printing needs, you can depend on our experience to provide you the printer that meets your precise specifications.

Product Inquiry
×
The information you enter here will be sent directly to the recipient. It is not stored on this sites database. Read more in our Privacy Policy
SEND