Consumers are becoming more savvy with regards to their food choices and many are turning to vegan, or plant-based alternatives. While it may seem these terms are interchangeable, as they both exclude animal products, they are not necessarily viewed the same way, says the Plant Based Foods Association (PBFA). Labels on vegan or plant-based products must accurately convey the message as well.

A 2017 Nielsen Homescan survey showed that: “While Certified Plant Based provides the same animal-product free assurance as the vegan label, it reaches more consumers. In the US, 39% of consumers are trying to eat more plant-based foods while only 3% are vegan. Vegan is a specific lifestyle and label, while plant-based includes a wider breadth of people who practice meatless Mondays or are flexitarian.”

Only foods that are plant-based with the intention of replacing animal-based products such as meat, egg and dairy alternatives are eligible for either type of label. In other words, according to PBFA director Michele Simon, the vegan logo – which can be applied to any product from cookies to baked beans – reassures vegans that the foods in question don’t contain any animal-derived ingredients. On the other hand, the plant-based logo (certified by NSF International) is more specifically designed to promote plant-based meat, egg and dairy replacements. 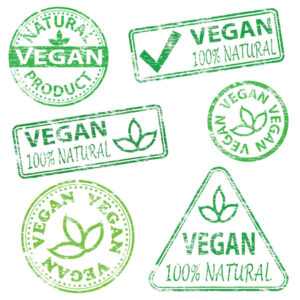 Within the vegan or plant-based sector itself, the debate is heating up as to how to label such products. Until recently, the U.S. dairy industry had been rather quiet about the use of the words like ‘milk’, ‘cheese’, or ‘butter’ on non-dairy products that are marketed to be used as a replacement for said products.

Lately, the dairy industry has been pushing back. Known as America’s Dairyland, Wisconsin is one of the largest dairy producers in the country.  It’s also American’s biggest producers of actual butter.

For years, entrepreneurs have been riding a wave of popularity for plant-based products, all the while using words similar to ‘plant-based milk’, or ‘vegan butter’ on their labels. Case in point, plant-based ‘milk’ retail sales totaled $1.8 billion for the year ending May 25th, 2019, which as a 6.5% increase over the previous year, according to a Neilsen report. Cheese substitute sales totaled $117 million, showing 17.4% growth. Cashew butters were up to $12.6 million, representing an uptick of 4.9%.

With the decline in the sales of milk, and other dairy products in general, the FDA announced it was ‘considering approaches to modernize standards of identity of dairy foods and would be collecting comment from the public.’ However, according to a review of the collected comments, the PBFA contends that 76% of the people polled are fine with the status quo.

States like Wisconsin, though, are pushing the Dairy Pride Act, which would require the FDA to create a system of stricter nationwide enforcement for vegan or plant-based labels. For example, if it says ‘butter’ it must mean it comes from a ‘hooved animal’, i.e., cow, or goat, etc.

As producers of plant-based or vegan foods, honesty is the best policy. With states, and potentially the federal government cracking down on the verbiage on labels, there’s no reason to not start the process now.

At Griffin-Rutgers we offer many different printers and labelers for the various types of materials in which dairy alternatives are packaged and labeled.

We can help you select the right system for your needs and help integrate it into your assembly line. The type of package you’ll be printing on (bags, blister cards, boxes, cases or pouches), as well as the size, shape and other factors will be considered when selecting the printing system for food labeling.

Product Inquiry
×
The information you enter here will be sent directly to the recipient. It is not stored on this sites database. Read more in our Privacy Policy
SEND